Becoming a storm chaser is a later step on the agenda of storm chasing. First, we need to get familiarized with what storm chasing actually is.

Storm chasing is not something metaphorical; this is an actual job that people do. It is actually self-explanatory.

To chase a thunderstorm, a tornado, or a hurricane – all of these fall under the category of storm chasing.

Tornadoes and hurricanes being the worst of the natural disasters hold the ability to destroy buildings, houses, crops and whatever comes their way.

People who live in areas where such natural phenomena repeatedly occur keep a close check on weather, and they evacuate their houses and buildings when any of these natural calamities are predictable.

Storm chasers, on the other hand, keep an even closer check on the weather reports for a different purpose.

Do they get paid? Do they do it for scientific purposes? Or, is it just the excitement or thrill of coming across something adventurous and dangerous?

We will come across all these questions later in this article.

In order to become a storm chaser, you first need to have a little knowledge about tornadoes and storms.

Can You Become A Storm Chaser? – Here’s How! 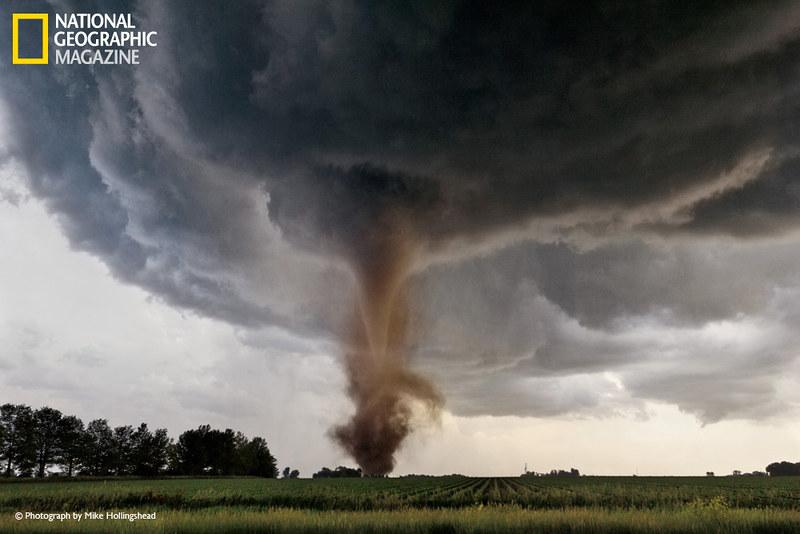 If you want to become a storm chaser, then it’s not necessary to have a meteorology degree!

But if all of your knowledge’s origin is social media platforms like twitter, facebook, and reality TV shows, then you have the wrong idea about becoming a storm chaser.

Here are some steps that you can follow if you are a beginner and want to pursue storm chasing as a career.

The first thing that you should be doing as a beginner storm chaser is to travel with someone who has been doing it for years. It would help you learn a great deal from their experience.

There are a lot of famous companies that charge you a few thousand dollars and take you on trips for ten days to a fortnight. During this period, you get to travel with someone who has been storm chasing for years.

You travel thousands of miles in pursuit of tornadoes and severe storms. Sometimes, you get lucky when you tackle a light storm or a little tornado.

The experts say that they avoid getting in the way of conditions that wreck houses and properties.

And they avoid taking pictures of loss of people because it’s against the work ethic, and also, it shows that you have a disrespectful behavior.

If you have the basic knowledge of storm chasing by this point, then the next thing you should be looking at is to become a storm spotter.

Radars sure do tell about where the next storm is going to be, but if you yourself have the knowledge of reading the weather, then you are good to go.

SKYWARM is a program by the National Weather Service that gives you the basic knowledge about meteorology and storm spotting. 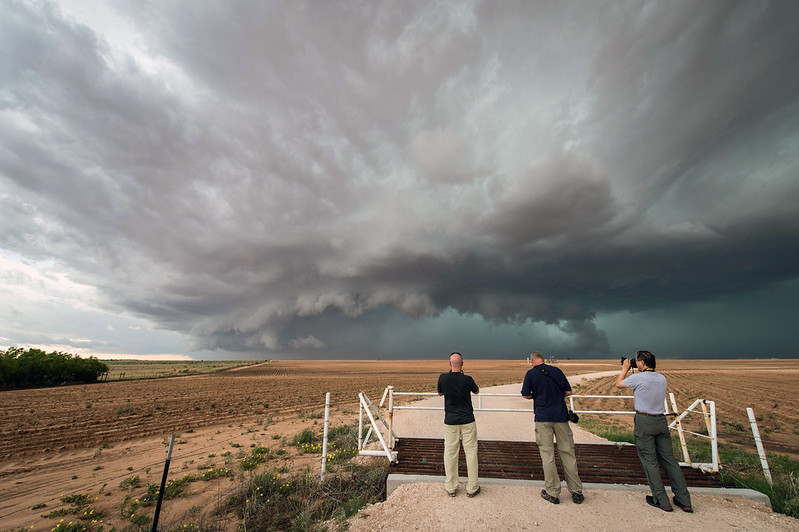 It’s a two-hour show, so anyone can watch this at home and be a storm spotter.

Storm spotting is about the monitoring and reporting of the severe weather conditions that happen to be in your area rather than chasing already active storms.

You can also volunteer with SKYWARM and travel with them for thousands of kilometers gaining you tons of experience.

Nonetheless, it’s better to monitor the weather conditions in your area, because you can always seek shelter.

If you think you have done ugh storm spotting and you are ready to set on an expedition, then you need to get under a mentor first.

Because there are still things like safety procedures when tackling storms, lightning, hail, tornadoes, and floods.

Again SKYWARM can be a great institute to begin with, or they can provide you with links to some great mentors who are willing to take you under their care wing.

Similarly, StormTrack is also a good place to find a mentor.

You are good to go on your own, once you have spent enough time with a mentor and you know about the following;

4. Getting The Gears You Need

As soon as you have gained enough knowledge about storm chasing, the next thing you need to do is buy suitable gear to cover the storms and other calamities.

This equipment can range from basic mobile phone cameras to custom equipment mounted on wheels.

Let’s have a brief go through of the basic equipment that’s good enough to start as a beginner;

Video Camera: The documenting crews use the latest High Definition cameras and sometimes even more than one camera to cover the storm from all possible angels.

If you do not have a lot of budget, even then you need to own a video camera.

Because you do not want all your efforts to go in vain if you can’t get good footage of the storm you have been chasing.

Digital Camera: Your digital camera comes handy covering the small details that your video camera might miss.You also need to capture images along with the video footage.

Secondly, you can always put these images on the internet and let other people know about your expedition through your pictures.

Videos take a lot of space on your storage devices.Pictures on the other just take a few MBs so you can take as many pictures as you want without the storage space constraint.

Laptops and Notebooks: You need to carry a laptop or a notebook with you all the time.Because it not only provides you with maps but updates you with the weather conditions each and every instant as well.

Secondly, if you have a laptop with you, then you can backup your data at the spot instead of waiting to go back.

Radios: There are two types of radios that we are talking about here. First ones are the radios that are known for reporting the weather and keeping you up to date with the climatic changes.

The second type of radio are the ones which are used for communication over short ranges. These are commonly known as the walkie-talkie or PMR systems.

SKYWARS teams that are traveling in more than one vehicle use these radios to stay in touch. You need to have both these radios with you.

These were the basic gears which every storm chaser needs to have. Along with these things, you need to keep your food supplies in check.

You can be stuck in harsh weather conditions for days, so you should have a lot of junk food or instant food and coffee with you.

This brings us to the last part of our discussion: whether the storm chasers earn or not? If yes, how do they earn? Is it a profitable trade or not? Let’s discuss these queries. Storm Chasing is not something that you only do for having fun, or meeting new people and making friends.

You can actually earn from storm chasing. And, that is a key objective for what most people get their feet wet in this trait.

Many people who start storm chasing as an adventure get so into it that they adopt it as their career and pursue it as their means of earning.

When we think about storm chasing as a career option, the first thing that comes to our mind is how much can I earn through storm chasing?

Or, how much will I be able to save annually?

The answer to these questions are the actual figures that people are getting as their salary or their rate, or what they charge per expedition.

Let’s shred some ideas below on how storm chasers can earn;

Selling The Footage of a Calamity

The footage that you make using your video cameras is worth a lot. Storm chasers usually get about $500 from news channels for each piece of footage. Or you can say footage of a single calamity.

Taking Tourists And Travelers on Expedition

People who are new to storm chasing and who are doing it for fun would pay you a great deal of money to bring you with them.

An estimate tells you that a single person would pay you $3500 to bring them along on your expeditions.

The more dangerous the location or area where you are headed is, the more you will be paid on your trip.

For example, if someone hires you like a storm chaser in Kansas, then it would probably cost $16,000. Because this area is famous for nasty tornadoes.

Annual Earning You Can Make

You are expected to earn $70,000 yearly, but then again, you have to travel thousands of kilometers on your own expense. So this does not save you a lot of money.

Storm chasing is new to people as a profession so it should not be so hard making your name in this trade if you try your best.

Once you make your name in this trade, people would not only recognize you, but they will even kill to have your footage and pictures. Haha! True story!

Warren Faidley is a well-known name in the world of storm chasing. In other words, you can say that he is the only professional storm chaser out there.

Each of his photos is sold in 5 figures and people not only admire his work, but they acknowledge him as the best in the business.

Reed Timmer is another name in the trade of storm chasing, not as famous as Warren Faidley but he is also known as one of the best storm chasers.

He received fame from the Discovery Channel’s show “Storm Chaser,” and he was awarded approximately $250,000.

So, if you can somehow make your name in this field for your hard work and dedication, then not only you can earn well, but you can be an international sensation.

What Does Storm Chasing Offer Other Than Earning?

Every job in this world has something to offer other than money. Otherwise, people wouldn’t be able to stick to the same job for years, and in some cases, even a lifetime.

Let’s look at what storm chasing has to offer for you except the cash you earn.

There was a time when our moms used to keep us inside the house when it used to rain, but those times are long gone.

People now actually travel on these wild expeditions just to have fun.

The thrill, the excitement, and the adventurous feel that you have while chasing a storm, that’s worth all the troubles and hardships.

While some people just go on these expeditions to do something new and to kill the boredom, there are scientists and researchers out there who go on these storm chasing trips to study the weather.

It has been observed that with every passing year there are more of these natural calamities as compared to the past.

So, the scientists go on these expeditions to study the effects of various factors on the environment and the factors that might be causing these increased natural calamities.

Some people collect tickets, some are fond of gardening, and some get their heads in between books!

Likewise, there are people out there who pursue storm chasing as their hobby.

Once you do something you love out of any benefits, you enjoy it for sure.

On your expeditions to new areas and new storm chasing adventures, you meet new people who have the same hobbies or same need to go after these wild and severe weather condition.

You not only make new friends, but you become a part of a huge community. No one simply goes on 12-18 hour drives simply staring at the road.

You get to share your adventures and listen to what others have been through and it’s the greatest of the experiences.